Is it Cat Defecating or Middening?

Experienced and Licensed Veterinarian and Certified Cat Behaviorist 25 Years in Practice with More Cats Pooping in the Litter Box Since 1999 and in Over 30 Countries (all with a Zoom appointment).

Join our long list of cat owners with cats defecating in the box 100% of the time.  We’ve Helped Thousands of Cat Owners in over 30 Countries Get the Cat Poop Back in the Litter Box. View 350 solved case studies and client testimonials from around the world.

For over two decades The Cat Behavior Clinic has solved the “perplexing” cat defecation issue around the world from Los Angeles to Kuwait.  Mieshelle Nagelschneider studied animal behavior at Oxford University, and The University of Edinburgh – The Royal School of Veterinary Studies.  Her animal behavior studies at Harvard University has also enabled her to help cat owners effectively solve their cat’s defecation issues in over 30 countries.  The clinic provides consultations for defecation issues and goes beyond the obvious strategies and facts to solve your cat’s defecating issue.

Important Update: We are currently scheduling Zoom and phone appointments with the doctor and behaviorist through May 30th.  For defecation issues, participate in our feline study and receive the reduced consult fee through April 20th.  Scheduled cat owners can also participate in Mieshelle’s upcoming National Geographic cat behavior show production. 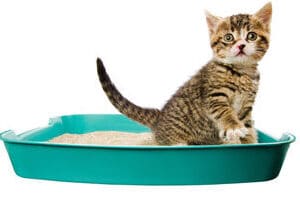 Misconception #1:  Middening is a Thing in Domestic House Cats Just Like Wild Felids

It’s not.  Much of the information about cat middening online is incorrect and should be removed. The truth is, it’s rare in house cats and extremely unlikely your cat is middening, but rather inappropriately defecating.  This is most likely due in part to your cat’s feline evolutionary biology and a variety of external factors.  We recommend you visit our defecation behavior page to learn more.   If your cat is merely pooping inappropriately, you’re in luck!  Pooping is much more easily solved than a middening problem.  Please contact the clinic if you have questions regarding your cat’s defecation behavior at 503-267-8888.

Our veterinarian and behaviorist’s experience and formal animal behavior studies ensure your cat will receive the highest level of appropriate care.  They have been conducting defecation consultations since 1999 and helped thousands of cat owners solve their feline defecation behavior issues in over thirty countries.  See our current outstanding Clinic Success Rate.

Considered the authority on the cat defecation issue, Mieshelle conducts hundreds of defecation consultations each year since 1999 and lectures worldwide to veterinarians and shelter workers on this very “perplexing” behavior issue.

You won’t find much information on middening on the Internet, but sometimes a stool is not just a stool. Stools left around the walkways of the home or on your pillow might be a form of marking done by your cat to delineate territory. Middening is as different from its defecation counterpart, in both motive and effect, as spraying is from mere urination. Middening comes from a little-heard English word that (as we’re sure you know) derives from the Old Norse term for a dunghill or manure pile.

If you type in middening into a search engine, it will, maddeningly, try to correct your spelling to maddening. “Was it maddening you were looking for?” Just say no. The fact that the search engine thinks you can’t spell, and won’t give you much information on middening in any event, is an indication of how rare middening is, at least indoors (it’s more often observed in cats outdoors or wildcat hybrids). But when it does happen, middening can be synonymous with maddening!

Middening is a form of marking (technically, “non-spray marking”). More dominant or confident cats may midden to send territorial messages, while less confident or anxious cats may midden on a human’s things in order to mix cat and human scents into an anxiety-relieving cocktail. The latter is also called associative marking.  Again, this is a rare occurrence and we rarely have come across a middening cat in the clinic’s history of consulting.

Middening is not only a strong visual signal, visible from a distance (unlike spray-marking), but a very strong olfactory signal as well.

Cats usually deposit their midden in very prominent locations so it’s not easily missed by other cats, a.k.a. the competition: in hallways or the frequently walked paths of household cats, near doorways leading outside or into certain rooms in the house, and on elevated locations like couches, on top of the dining room table, tables, beds, and the pillow on your bed. They often choose to midden on paths that lead to important resources or in locations that are important pieces of real estate (and about which a cat may feel competitive with other cats).

A rare issue for Indoor-only Cats: Many cats will simply defecate in these listed locations as well, but it’s more common for them to defecate in less prominent locations like the corner of a dining room. Typically middening is done away from the center of the home, and away from the nesting area’s food and cat beds. However, a dominant cat who wants to deter other cats may even midden territorially in front of litter boxes or food bowls.

In multi-cat households, one cat may feel an impulse to cover the odor of a housemate’s waste with his own. A sort of cherry on top, if you will. Cats who are insecure about their territory might even step outside the group litter box and leave stool right next to it. The cat’s motivation – marking – makes this middening rather than mere defecation.

Signs of mere defecation also include your cat trying to cover up the stool with nearby laundry, or claw marks in the carpet from their attempts to cover their stool. Cats will not cover a stool if they’re leaving it for marking purposes. They want it to be seen!

If you’ve got a rare middening problem, you will need a behavior plan to address the problem.  And no surprise – cat behavior is highly complex, and solving it requires both expertise and specific, specialized information about your cat. That means a conversation with an expert. The information and help you receive from our cat behaviorist or veterinarian, is up to date in the latest studies of animal psychology and more specialized and involved help than what you’ve read on the internet.

Are you ready to give your cat and yourself the ultimate gift of happiness and mutual regard? Have you run out of ideas, or hope, and you’re at your wit’s end? Do you think you’ve tried everything?

We’re pretty sure you haven’t.